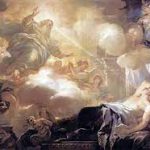 Shortly before YHVH handed the “tablets of the testimony” to Moses on Mount Sinai, he uttered the following declaration about one, Bezalel, who would lead the construction of the Tabernacle:

“See, I have called by name Bezalel, the son of Uri, the son of Hur, of the tribe of Judah. And I have filled him with the Spirit of God in wisdom, in understanding, in knowledge, and in all kinds of craftsmanship.” (NASB, Exodus 31:2-3)[1]

Bezalel, whose name means “in the shadow of God,” was filled with the Spirit of God, furnishing him with a skill set of wisdom, understanding and knowledge by which he would undertake the melachah, translated as “craftsmanship” but meaning “creative work”, of fashioning God’s residence on Earth, the mishkan. Three terms are joined together in God’s statement to Moses:

That Bezalel was filled with the Spirit of God is in essence to say that wisdom, understanding and knowledge were given to him by God. That is the first and most important thing to grasp. On the heels of that, what exactly do these terms mean, and how do they relate to the title of this lesson, discernment?

There are volumes that could be written about these terms. In the interest of conciseness, I will approach their meaning from an ancient Hebrew point of view.

Benner identifies the two-letter, parent root of this word as cham (chet-mem). The concrete meaning of cham is heat. In its ancient, pictographic form, the chet resembles a wall, that which “separates” one space from another. The pictographic  mem resembled water. When water is subjected to heat, it “separates”, a process we know as evaporation. Benner therefore contends that the central idea behind chokmah¸ that which we translate as wisdom, is separation.[2] In an abstract sense, when we employ chokmah in our endeavors, that is, when we practice chakam (the verb meaning to act wisely), we separate good from bad, or right from wrong.

The three-letter root of tebunah is bin (bet-yod-nun). Binah is another derivative of bin. In its concrete meaning, bin refers to something “between”. If chokmah  is like a wall separating two spaces, bin is like a space separating two things. In 1 Samuel 17:3, a valley sat between two mountains. On one mountain stood the army of the Philistines and on the opposite mountain stood the army of Israel. If the valley was the connecting space between the armies, it also served to make each army distinct, to distinguish one from the other. Though bin is most often translated as “understanding”, its most essential meaning is twofold, either making a connection between discrete objects or distinguishing between them. This is the ancient, Hebraic notion of what it means to discern something. This act of making connections or distinctions can apply to persons or ideas. In the abstract, the person exercising tebunah distinguishes between truth and falsehood.

The two-letter root of da’at is da (dalet-ayin).  Dalet in Hebrew means door. According to Benner, the ancient, pictographic dalet resembled a tent door. Ayin means eye, and not surprisingly, the pictographic ayin was in the form of an eye. As people enter and exit a tent, that is, as they go in and out, the tent door moves back and forth. When the dalet and ayin form a word, it comes to mean “the back and forth movement of the eye. When something is carefully examined, one moves the eye back and forth to take in the whole of what is being examined. In the Ancient Hebrew mind, this careful examination is understood as knowledge and experience on an intimate level.”[3]

Derived from the same root as da’at, yada is the verb meaning to know. We see it used repeatedly with respect to intimate relations.

“And Adam knew (yada) Eve his wife; and she conceived, and bare Cain, and said, I have gotten a man from the Lord.” (Genesis 4:1, KJV)

“And they rose up in the morning early, and worshipped before the Lord, and returned, and came to their house to Ramah: and Elkanah knew (yada) Hannah his wife; and the Lord remembered her.” (1 Samuel 1:19, KJV)

Yada can also be used to characterize the intimate relationship between man and God, or, in the instances below, the lack of it.

“And Pharaoh said, Who is the Lord, that I should obey his voice to let Israel go? I know (yada) not the Lord, neither will I let Israel go.” (Exodus 5:2, KJV)

“Now Samuel did not yet know (yada) the Lord, neither was the word of the Lord yet revealed unto him.” (1 Samuel 3:7, KJV)

Knowledge in Hebrew is a reference to the lived experience of an individual, or even a group or nation, with someone or something.

Grasping the difference between chokmah, tebunah (binah) and da’at can be a challenge. A quote from an insightful rabbi may be helpful:

“When you tell a child not to touch the stove because it’s hot and it burns, you’ve given him chochmah. When the child sees a pot on the stove and figures out that it might be hot too, he’s using his binah. However, when he puts his hand on the stove (Ouch!), he now has da’at! “[4] –Rabbi Noach Orlowek

We find the terms wisdom, understanding and knowledge grouped together in a number of Biblical passages. One such passage is found in 1 Kings 3:5-15. A chiasm emerges into view:

A–In Gibeon, the LORD appeared to Solomon in a dream (chalom) at night, and God said, “Ask what I shall give you”. (v.5)

B–You have made your servant king in place of my father David, yet I am but a little child; I do not know (yada) how to go out or come in. (v.7)

C–So give your servant an understanding heart (lev shomea: a “hearing heart”) to judge your people to discern (bin) between good and evil. (v.9a)

D–It was pleasing in the sight of the LORD that Solomon had asked this thing. (v.10)

The chiasm opens with the LORD appearing to Solomon in a dream saying “Ask what I shall give you”.  It closes with Solomon arising from his dream. Near the center of the chiasm, we find both Solomon’s request and the LORD’s answer. It is widely supposed that Solomon asked for wisdom. What he actually asked for is normally translated “an understanding heart”. The Hebrew, however, reads lev shomea, a hearing heart. What exactly does that mean?

The word, shomea, is the participle of its root word, shama, which in turn means to hear. Hearing to the Hebrew ear is synonymous with obeying. This is the same verb that appears in Deuteronomy 6:4, “Hear O’Israel, the LORD our God, the LORD is one.” Taken Hebraically, this is a call to enter the sphere of the LORD’s authority. A person with a lev shomea signals the same intention. Solomon, freshly anointed as the King of Israel, requests an obedient heart, open to the LORD’s instruction, so that with discernment (bin) he will properly judge, that is, govern God’s people.[5]

God answers by giving Solomon a “wise (chokmah) and discerning (bin) heart”. We observe two words in this verse that are central to our study: chokmah and bin. The word bin repeats in verses 9 and 12. Solomon asked for bin, the ability to distinguish good from evil, and the LORD granted this, stating “I have done according to your words.”

At the center of the chiasm sits verse 10 which reads: ” It was pleasing in the sight of the LORD that Solomon had asked this thing.” What thing had Solomon asked and for what purpose? He asked for a “hearing heart” so that he could govern God’s people with discernment (bin). Discernment pleases God.

We have identified the words for wisdom and discernment in this passage. Where then is knowledge? We find it in verse 7. Solomon, the new king, likens himself to a child stating: “I do not know how to go out or come in.” The word translated as know is yada, the verb meaning “to know” which corresponds to the noun da’at, meaning knowledge. Yada here is joined in the text to the act of going “in and out”, a reference to the concrete meaning of da’at and specifically its root, da, the image of which is a tent door going “in and out”.

If in verse 7 Solomon describes himself as a na’ar–a child–one with little knowledge, that is, one with a lack of lived experience as a king, then God, by granting Solomon chokmah and bin, will render Solomon into a man of wisdom, discernment and knowledge unlike anyone before or after him. Verse 7 and line 12b form an antithetical parallelism.

The same Solomon who conversed with God in a dream later said: “For the LORD gives wisdom (chokmah); from His mouth come knowledge (da’at) and understanding (tebunah).” (Proverbs 2:7) Bezalel, the recipient of these gifts, was filled with the Spirit of God. Christians claim that since the first Pentecost following Jesus’ ascension to heaven, they too have been filled with the Spirit. Bezalel, according to his name, was in the “shadow of God”, bringing forth the skills of wisdom, discernment and knowledge. Are Spirit-filled Christians equally in that shadow, or is it only a partial covering, or dare I say, no covering at all?

To wit. . .I routinely receive social media posts from Christians claiming all manner of things, anything from signs bringing forth the immanency of the “end times” to declarations about fulfilled prophecies in the here and now to conspiracies of the Devil and his emissaries among us to depopulate the Earth. The list of claims could go on and on. They are forwarded absent any indication that the senders investigated the claims nor any comment whatsoever from the senders, implying their assent to the truthfulness of the claims.

The eye that travels back and forth is the eye that examines that which lies in front of it. This is the ancient, Hebraic meaning of knowledge. And knowledge is “discovered”, according to Solomon, after one applies wisdom and discernment.[6] One’s lev shomea welcomes the gifts of wisdom, discernment and knowledge, the latter of which is evidence of an intimate, lived experience with our Maker. The Christian who fails to practice even a modicum of discernment–one who fails to even try to distinguish truth from falsehood and blindly circulates unexamined claims– is a Christian who has no intimacy with the Spirit he claims is residing in him.

[5] The idea of the lev shomea is strongly implied by Solomon in Proverbs Chapter 2. It begins with a call to obedience in verse one: “My son, if you will receive my words and treasure my commandments within you.” The one so called is then encouraged to seek wisdom and discernment. “Make your ear attentive to wisdom (chokmah), incline your heart to understanding (tebunah).” This inclination within oneself leads to discerning the “fear of the LORD” and the discovery of “the knowledge of God”. (v.5)

One thought on “Examining Discernment”