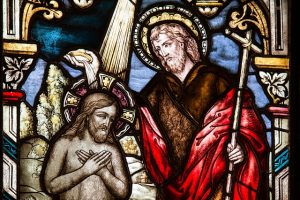 I promise to be brief.

“Baptism” is mentioned in the beginning and end of Mark’s Gospel.

Mark first tells the reader about John’s baptism in 1:4-13. He references John’s prophetic call (“The beginning of the gospel about Jesus Christ,” 1:1-3), how baptism fulfills it (vv4-6), and his message:

“After me will come one more powerful than I…” in reference to Jesus (v7). John was, after all, the forerunner for the Messiah.

And when the Messiah revealed himself to the pubLic his first act was to be “baptized by John in the Jordan” (v9). After this the Spirit led the Messiah to the desert “forty days, being tempted by Satan” (vv12,13).  John’s imprisonment proved to be the untimely end of his ministry (v14), and the Messiah – that is, Jesus – began “proclaiming the good news of God. ‘The time has come,’ he said, ‘The kingdom of God is near. Repent and believe the good news’” (vv14,15).

Now Mark closes his gospel with another proclamation of Jesus, the Messiah: “Go into all the world and preach the good news to all creation. Whoever believes and is baptized will be saved” (16:16).[1]

Thus, a linkage is provided between believing the gospel and baptism.

Since the gospel is linked to salvation, does it mean that baptism is also? Here is the text again: “Whoever believes and is baptized will be saved.” The syntax of the Greek text may illumine us.

Let me provide the text as it appears in interlinear (English/Greek) fashion:

English: The one believing  and being baptized shall be saved

“One believing” is aorist active, that is, the subject[2] of the sentence is the one who believes.

The word “believe” here is a participle (a verbal noun), describing a person. Thus, “one who believes.”

“Being baptized” is likewise participle, aorist passive, that is, the believer was baptized by someone else. In other words, baptism is an evidentiary aspect of belief of the believer.  Baptism is part of the gospel that one believes.

The text requires baptism for belief. Does the text also require baptism for salvation? I do not believe so.

Let us go back to the Greek. There is a rule (“Granville Sharp Rule”) regarding the use of the connective “and” (kai) that joins two nouns together.

The presence or absence of the article “the” (ho) is crucial[3] for interpretation here.

The first rule states that when 2 nouns are connected by kai (“and”) and each is preceded by the definite article “the” (ho), the nouns are distinct from one another and are meant to be treated separately.

Thessalonians: “The grace of our God and the Lord Jesus Christ.”  “God” (Greek theos) has the article “the” (ho) in the Greek text, and “Christ” (christou) does not have the article. “Both nouns are in the same case, and therefore should read ‘the grace of Jesus Christ, our God and Lord.’”

How does the Granville Sharp rule apply in our Markan text?

Pisteusas and baptistheis are both in the Nominative Case, the Greek case[7] for nouns.

But here is what is crucial: Pisteusas is preceded by the article ho (“the”) while baptistheis is not. The first is articular and the second is anarthrous.

Applying the second Granville Sharp Rule to this Markan text, we reach this finding. The second noun is a further description of the first noun.

Baptism is not something a believer does in addition to believing the gospel. Baptism is what describes a believer.

That is what the text is saying.

And we do not read of unbaptized believers in the New Testament.

[1]I am aware of the presence of earlier Greek manuscripts that do not have the “longer ending” (16:9-20). My aim is not to argue for one view or another. This short study is simply put out there to further our understanding of the usage of words in a Greek text as it appears in our modern Bible versions.

[2] There are “moods” in Greek grammar as there are in English.

[3] I use the term “crucial” in the sense of what is important and determinative for meaning.

[4] “Pastors and teachers” can be better read as teaching pastors, or in hyphenated form, “pastors-teachers.”

[5] A verbal noun (participle) partakes of the nature of a verb and a noun.