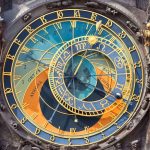 When studying Scripture, an infrequently-considered topic is time. The three major, monotheistic religions–Christianity, Islam and Judaism–treat time differently, each following its own calendar, complete with times that are set aside for observance. Importantly, as Johnson has noted, all of these faiths depart, to one degree or another, from what he calls “God’s clock”, a depiction of time that secures its foundation in the words of Scripture.[1] For instance, while the birth of Jesus is covered in the Gospels of Matthew and Luke, the annual celebration of it, Christmas, is not found in the Bible. There is no instruction from Jesus that His birth is to be remembered on a particular date or at an appointed time, if at all.

We first find the term, appointed times, towards the very beginning of the Biblical narrative.

And God said, Let there be lights in the firmament of the heaven to divide the day from the night; and let them be for signs, and for seasons, and for days, and years. (Genesis 1:14, KJV)

The word translated above as “seasons” is in Hebrew, moadim. This is the plural form of moed (pronounced mo-ade), which in turn derives from the verb, yaad, meaning “to appoint.” The noun, moed, takes on the meaning of an appointment, meeting or appointed time. Moses met with God at the ohel moed, the tent of meeting. When God wishes to meet with His people, He sets an “appointed time” for that to take place.

The Torah concentrates a description of appointed times in the Book of Leviticus, Chapter 23. Before launching into a discussion of this passage of Scripture, it may be helpful to explore the essential “mechanics” of the Biblical calendar. The first month on the calendar is mentioned in the Book of Exodus:

This month shall be unto you the beginning of months: it shall be the first month of the year to you. (Exodus 12:2, KJV)

The word translated above as “month” is the Hebrew, chodesh. The root of this word is the verb chadash, meaning that which is “new” or “renews”. The noun, chodesh, means both “month” or “new moon”, the visible, waxing crescent that “renews” at the beginning of each lunar cycle, every 29th or 30th day.[2]

Just before God unleashed the plague against the firstborn, leading to the immediate release of the Israelites from enslavement in Egypt, the LORD said to Moses:

The “first month” mentioned in Exodus 12:8 is called the “month of the Abib“. What then is abib? It is a state of ripening of a barley plant. Barley, which grows in the wild throughout the land of Israel, can, through careful observation, be discerned to have reached the abib state. Barley found in the abib state, was described as a casualty of the plague of hail:

The phrase “in the ear” found in verse 9:31 translates the Hebrew word, abib. The first new moon following the discovery of barley that has become abib constitutes the first day of the first month of the Biblical calendar. From this understanding of what establishes the beginning of the Biblical year, the appointed times found in Leviticus 23 fall into place, with the exception of the weekly Sabbath covered in verse 23:3. For instance, the Passover falls “in the first month, on the 14th day of the month at twilight.” (Leviticus 23:5) The Feast of Unleavened Bread then begins “on the fifteenth day of the same month” (Leviticus 23:6) and lasts for seven days.

The next appointed time, not named in Leviticus 23, is otherwise known as the Feast of Weeks (Shavuot). It falls on a date according to a specified counting of weeks or days. “You shall also count for yourselves from the day after the sabbath[3]. . .there shall be seven sabbaths. You shall count fifty days to the day after the seventh sabbath.” (Leviticus 23:15-16, NASB)

The vast majority of Christians reject the observance of these appointed times. At or near the top of the reasons for this is that they consider the appointed times cited above to be “ceremonial” observances, satisfied once and for all by Jesus, the Messiah. Therefore, they relegate them to observances reserved exclusively for Jews. Debating the relevance of these particular occasions for Christians is not the purpose of this article. However, we should operate under a principle advanced by Paul in his second letter to Timothy:

All Scripture is inspired by God and profitable for teaching, for reproof, for correction, for training in righteousness. (2 Timothy 3:16)

Our cursory explanation of the “mechanics” of the Biblical calendar has prepared us to examine the literary structure of Leviticus 23. This may lead us to uncover a hidden treasure in its textual arrangement that makes the discussion profitable for all studious readers of the text, not just Jewish believers.

Leviticus 23 begins and ends–an inclusio–with a synonymous parallelism capturing Moses’ declaration of the appointed times to the sons of Israel.

The LORD spoke to Moses, saying, “Speak to the sons of Israel and say to them, ‘The LORD’s appointed times which you shall proclaim as holy convocations–My appointed times are these: (Leviticus 23:1-2, NASB)

So Moses declared to the sons of Israel the appointed times of the LORD. (Leviticus 23:44, NASB)

Following a brief mention of the Sabbath as an appointed time, the LORD’s instruction to Moses in verse two essentially repeats in verse four:

These are the appointed times of the LORD, holy convocations which you shall proclaim at the times appointed for them. (Leviticus 23:4, NASB)

Between the synonymous declarations of verses 23:4 and 23:44 are two groups of appointed times.

The Feast of Unleavened Bread

The Feast of Weeks

The Day of Shouting

The Day of Atonement

The Feast of Tabernacles/Shemini Atzeret

The appointed times in Leviticus 23 are distributed, more or less evenly, around the central idea of the literary arrangement. The parallelism involving harvesting points directly to this idea, found in Leviticus 23:22:

When you reap the harvest of your land, moreover, you shall not reap to the very corners of your field nor gather the gleaning of your harvest; you are to leave them for the needy and the alien. I am the LORD your God. (Leviticus 23:22, NASB)

The central idea is that one should care for the needs of the poor and the alien, both groups of whom are those without land from which to feed themselves. This is a recurring instruction in the Torah. Immediately relevant to its placement at the center of the appointed times in Leviticus 23, we find essentially the same instruction in Leviticus 19:

When you reap the harvest of your land, do not reap to the very edges of your field or gather the gleanings of your harvest.  Do not go over your vineyard a second time or pick up the grapes that have fallen. Leave them for the poor and the foreigner. I am the Lord your God. (Leviticus 19:9-10)

The appointed times, His moadim, are important to the LORD. It is on those occasions that He wishes to meet with His people. That notwithstanding, the literary structure of Leviticus 23 points to a more important matter at hand: providing for those who are not able to provide for themselves. Leviticus 23:22 is not there by accident. And although it is spoken to the sons of Israel, it is a matter that “crosses over” into the teachings of Jesus. Therefore, it has relevance for Christians, even those who regard the moadim as purely ceremonial observances.

[2] We find an instance in which chodesh is properly translated as “new moon” in the story of the Shunammite woman. Upon the death of her son, she urgently desired to seek out the prophet Elisha to which her husband replied: “Why will you go to him today? It is neither the new moon (chodesh) nor sabbath.” (2 Kings 4:23, NASB)

[3] This sabbath marks the sabbath falling immediately after the seven days of the Feast of Unleavened Bread. The day after that sabbath begins the counting of seven sabbaths or fifty days, leading to Shavuot.

One thought on “Appointed Times”