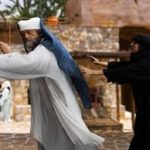 B–“And there was a widow in that city who kept coming (ercheto: erchomai)[3] to him and saying, ‘Give me justice (ekdikeo:ekdikos–to carry out justice) against my adversary.’” v. 3  (The widow’s wish)

C–“For a while he refused, but afterward he said to himself (eipen en heauto–said within himself). . .” v. 4a

B–“‘. . . yet because this widow keeps bothering me, I will give her justice (ekdikos), so that she will not beat me down by her coming (erchomene: erchomai).’” v. 5  (The judge’s wish)

Pastor Andy Basilio has coined a phrase:  A text cannot mean what it never meant. To me, this is a critical foundation piece for the study of Scripture. Concerning the New Testament, this principle obliges us to visit the textual meaning  to the 1st-Century believer to whom the text was originally given, taking into account the history and culture of those times, and perhaps most importantly, the literary organization of the text used by the writers in those times.

This principle finds one of its many applications in a parable told by Jesus and recorded by Luke in Chapter 18:1-8 of his gospel. It is often referred to as The Parable of the Persistent Widow. Friends of Jesus studied this several years ago using the Thematic Method. The theme of the parable was prayer. This is evidenced in verse 1:  “Then Jesus told his disciples a parable to show them that they should always pray and not give up.”  In the Thematic Method, the “what,” “how” and “why” of a theme is explored. During our group study, we considered these aspects, with a special emphasis on the “why” and “how.” Why do we pray? In the face of problems, prayer “strengthens” and “supports” us. Help on earth is not always available, and is in fact, sometimes denied. How do we pray? If the widow’s behavior is our example, we pray persistently. We drew the latter observation not only from verse 1 but also from verse 3 which speaks of the “coming” of the widow to the unjust judge. This “coming” is the Greek ercheto, spoken in the imperfect tense, indicating a continuing or repetitive activity.

I’d like to revisit the Parable of the Persistent Widow with an emphasis on “the what question.” What does it mean to pray? Did Jesus provide an insight to this question within the parable? Did Luke organize the text in such a way to “point” to the meaning of prayer in consideration of the audience to whom the parable was originally addressed?

In Greek, the verb, pray, is proseuchomai. It is a combination of two Greek words, pros meaning towards or exchange, and euchomai, meaning wish. The HELPS Word-Studies defines this word, proseuchomai, as an “exchange of wishes.” When we pray, we advance a wish to God. Because this is a “relational” term, when we advance our wish, there is embedded in the action captured by this word, a “return” of some sort. In the case of God, what is “returned” is His wish, which is, in effect, an expression of His will. The efficacy of prayer from our point of view– whether it is answered in the way that we wish for (in terms of content as well as timing)–depends on whether our prayer aligns with God’s will.

Looking at the chiasm, what is the widow’s wish? She wants justice to be carried out against her adversary. The Greek, ekdikos, meaning justice, corresponds to the Hebrew, shaphat. Shaphat, as well as ekdikos, refers to the carrying out of a verdict or judgment. Moses told his father-in-law, Jethro, “when they (the Israelites) have a dispute, it comes to me, and I judge (shaphat) between a man and his neighbor and make known the statutes of God and His laws.” (Ex. 18:16) In the case of the widow, we neither know the matter at hand nor the claim of her adversary. Therefore, the content of the dispute is not the issue in Jesus’ parable. Rather, the sole matter is simply that a “wish” existed.

What was the wish of the unjust judge? He wished that the widow would not “beat him down”[4] by “coming” (erchomai) to him. And when he resolved to give the widow “justice,” to carry out a verdict in her favor, his wish (based on his will) and her wish fell into alignment. There was an exchange of wishes.

In organizing his account of Jesus’ parable in this way, Luke provided an answer to the what question–what does it mean to pray–consistent with the definition of prayer in Greek, proseuchomai, an exchange of wishes.

But there’s more. What does it mean to pray in Hebrew? The root word for prayer in Hebrew is palal. It means to direct one’s heart and mouth to God.[5] This infers that prayer (palal) emanates from deep within a person. Another meaning of the word is to mediate or to judge. For instance, when the high priest in the time of Samuel, Eli, learned that his sons, Hophni and Phinehas, had sinned against the LORD, he told them: “If one man sins against another, the judge (elohim) shall judge (palal) him: but if a man sins against the LORD, who shall entreat (palal) for him? Notwithstanding they hearkened not unto the voice of their father, because the LORD would slay them.” (1 Samuel 2:25) As a summary statement, the word palal can be understood as mediating or judging a matter from within oneself.

At the center of the chiasm in verse 4, the text states that the unjust judge “said to himself,” that is, he spoke to himself. From within himself, he arrived at a judgment in the matter of the widow. This inner conversation he had with himself is a reflection of the meaning of palal, mediating a situation introspectively. In the course of practicing palal, he reconciled the wish of the widow to that of his own.

The text cannot mean what it never meant. In this case, the evangelist Luke has organized the text of Jesus’ parable to point us toward the essential meaning of prayer as it would have been understood by his 1st-Century audience, first to the meaning of proseuchomai, the exchange of wishes in verses 3 and 5, and ultimately in verse 4a, the meaning of palal–judging a matter within oneself–at the center of the chiasm.

[1] Phobeo is the word from which phobia originated.

[2] Entrepo is a combination of two words–en meaning inside or within and trope meaning to turn. Trope in English derives from  this word meaning a word or “figure of speech” that “turns toward” a non-literal meaning.

[3] Ercheto is the imperfect tense of erchomai, signifying a “continued” or “repetitive” coming.

[4] The word translated as “beat me down” is hypopiazo, meaning to strike under the eye.

[5] An example of this is the prayer of Hannah found in 1 Samuel 2:1: “Then Hannah prayed (palal) and said, “My heart exults in the LORD; my horn is exalted in the LORD, my mouth speaks boldly against my enemies, because I rejoice in Your salvation.” We see the heart and mouth referenced in Hannah’s prayer.