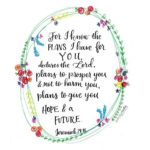 And seek the peace (shalom) of the city to which I have carried you into exile. Pray to the Lord for it, Jer. 29:7a

“Do not let the prophets and diviners among you deceive you. Do not listen to the dreams you dream. Jeremiah 29:8

For falsely they prophesy in My name. I have not sent them,” declares the Lord. Jeremiah 29:9

“When seventy years are completed for Babylon, I will come to you and fulfill my good promise to bring you back to this place. Jeremiah 29:10b

For I know the thoughts (machashaboht)  I have for you,” declares the Lord, “thoughts (macshboht) of peace (shalom) and not of evil, to give you hope and a future. Jeremiah 29:11

We have repeatedly heard Jeremiah 29:11 quoted in many sermons and teachings. “For I know the thoughts (machashaboht) I have for you,” declares the Lord, “thoughts (macshboht) of peace (shalom) and not of evil, to give you hope and a future.” Typically, it is recited as an encouragement to the brethren, who may be beset with trials and tribulations. Most of the time I have heard this, it is read as a standalone verse, absent any context to whom it was written, and most importantly, absent any mention of the literary structure to which it belongs. And moreover, it is typically preached that the LORD will act on His own, unilaterally, not through, or in conjunction with, human beings. God’s unilateral action on our behalf has, for many, become the paradigm of God’s action in the world, outweighing, if not ignoring, God’s work through human beings whose purpose in the world from the very beginning is to carry out His will on Earth.

Each of the three climactic parallelisms in this structure is introduced by a repeating phrase, “Thus says the LORD.” (koh amar Yehovah) Verse 4 and line 8a repeat the following, “Thus says the LORD of Hosts, God of Israel.” (koh amar Yehovah Tsbaoht, Elohe Yisrael) This type of repetition should immediately grasp our attention. The context here is that the LORD is speaking to the Judean exiles in Babylon through His designated prophet, Jeremiah.

The first climactic parallelism begins in verse five, pointing to a conclusion in line 7b. Here, there are a succession of instructions that share the common thread of how the people are to live during their exile in Babylon. Among these instructions are “build houses. . .plant gardens. . .take wives. . .increase in number. . .seek the peace of the city. . .pray for it (the peace of Babylon).” Far from expectantly waiting for the LORD to unilaterally bring them out from captivity, they were expected by the LORD to do something while in exile. They were to become members of a community not their own, working and praying for its well-being (shalom). And these actions point to a conclusion: “For in its peace (shalom), you will be in peace (shalom).”

Skipping forward to the third of the three climactic parallelisms, we find the prophecy of the return of the exiles to their land revealed. As before, it is introduced by koh amar Yehovah, “thus says the LORD.” Line 10b  breaks into two half lines connecting the when and what of the restoration. “When seventy years are completed for Babylon” is when the exile will end.  “I will come to you and fulfill my good promise to bring you back to this place.” The words “bring you back” is a translation of shuv, meaning “return.” The word “place” is a translation of qum, meaning to “stand” or “arise.” Thus, to “bring you back to this place” would likely mean to return you to your rightful standing in the place promised to the ancestors of Judah, the Patriarchs.

The oft-quoted verse 11 is the “conclusion” that lines 10a and 10b point towards. The length of the exile, 70 years, and the return to their standing, their place, are the thoughts of shalom (peace) that the LORD has for His people. It is not a matter of speculation or something mystically left unsaid. The LORD’s thoughts, His machashaboht, are for the well being of His people, their shalom, that is already expressed in the first climactic parallelism as “building houses, planting gardens, taking wives, multiplying, praying for their captors,” and moving forward, the elements of the third climactic parallelism, remain in exile for 70 years and return to their land. For as expressed in the first climactic parallelism, they will seek the peace of Babylon whereby they will be in peace themselves. The two climactic parallelisms are, in fact, parallel to each other. One expresses the work of the exiles during their captivity, while the other expresses the corresponding work of the LORD. The exiles will work and pray for the peace of Babylon and the LORD will bring them peace. Shalom will bring forth shalom. This is the essence of chesed, a reciprocal obligation between parties in covenant with each other, in this case the Judean exiles and the LORD of Hosts, God of Israel.

What exactly is the false prophecy being spoken of here? In Chapter 27, the LORD instructed Jeremiah to prophesy to Zedekiah, King of Judah:  “Bow your neck under the yoke of the king of Babylon; serve him and his people, and you will live. . .  Do not listen to the words of the prophets who say to you, ‘You will not serve the king of Babylon,’ for they are prophesying lies to you.  ‘I have not sent them,’ declares the Lord. ‘They are prophesying lies in my name. Therefore, I will banish you and you will perish, both you and the prophets who prophesy to you.’” (Jeremiah 27:12, 14-15) In Chapter 28, a false prophet, Hannaniah, claimed:  “This is what the Lord Almighty, the God of Israel, says: ‘I will break the yoke of the king of Babylon. 3 Within two years I will bring back to this place all the articles of the Lord’s house that Nebuchadnezzar king of Babylon removed from here and took to Babylon. 4 I will also bring back to this place Yeconiah, son of Yehoiakim king of Judah and all the other exiles from Judah who went to Babylon,’ declares the Lord, ‘for I will break the yoke of the king of Babylon.’” (Jeremiah 28:2-4)

In the case of Hannaniah, the LORD made good on his promise that those prophesying in His name would perish. (Jeremiah 28:16-17) The name, Hannaniah, is in Hebrew, Chananyah, consisting of two words, chanan meaning grace or favor, and Yah, an abbreviation of God’s principal name, Yehovah. Therefore, the name would mean “Yah favors” or “Yah is gracious.” The false prophecy of Hannaniah–that the exile would be terminated in two years–was incorrectly seen in those times, consistent with the prophet’s name, as a “gracious act” of God. The true prophecy, revealed in the third climactic parallelism, was 70 years of exile, something later in the chapter that is reiterated as a “long time.”

Though pastors and preachers today likely overuse Jeremiah 29:11, it is nonetheless clear that today, as in the times of the Judean exile, the character of God remains the same. The purpose of this article is to reveal the literary structure of the Jeremiah passage in which verse 29:11 is found in the hope that knowing this will lead to a more informed and nuanced usage of the verse moving forward.

Special appreciation is due to both Pastor Andy Basilio and Pastor Rich Anderson whose recent Facebook post and comment regarding the  importance of context in reading and interpreting Scripture inspired me to publish this article, something that had been gathering dust on my desk for the past couple of years. https://m.facebook.com/story.php?story_fbid=1476309289231650&id=100005577796684