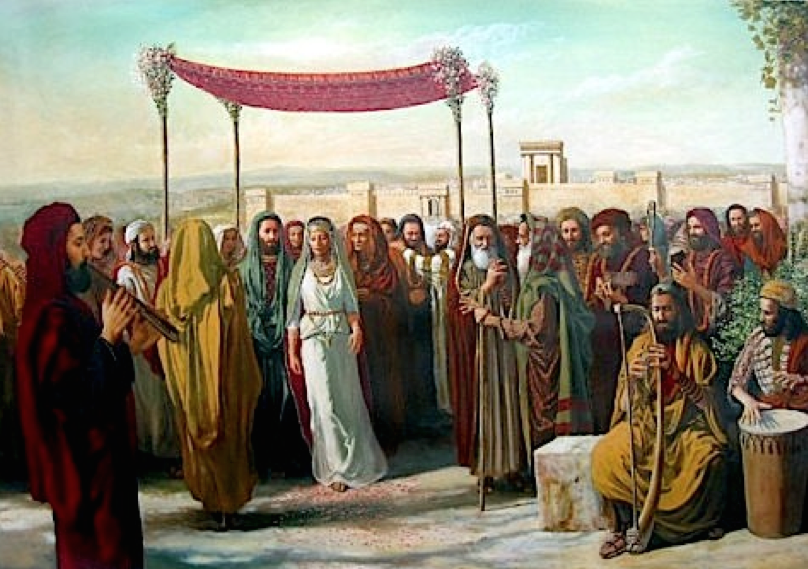 B–No one comes (Gr. erchetai from the root, erchomai) to the Father but through Me.”  v. 6b

D– He who has My commandments and keeps them is the one who loves Me. v. 21a

B–and My Father will love him, and We will come (Gr. eleusometha from the root, erchomai) to him and make Our abode (Gr. mon-ay) with him.”  v. 23b

In our examination of John 14:3-6 in Part 2 of this series, we looked at those verses in the context of the Jewish wedding–a marriage motif. After departing to prepare a place for his bride–presumably at his father’s house–the bridegroom “comes back” to join the two together “so that where I am, you will be also.” That’s the message of verse 3. The verb, come–erchomai in Greek–repeats in verse 6b. “No one comes (erchomai) to the Father but  through Me,” states Jesus. In the marriage motif, it is the exclusive privilege of the bridegroom to “carry away” his bride to the Father’s abode. Verses 3 and 6b, when seen as a synonymous parallelism, suggests that it is equally the exclusive privilege of Jesus, the master, to “carry away” His disciples to His Father. The relationship of a bridegroom to his bride aligns with the relationship of a master to his disciple.

Inside verses 3 and 6b, we also detected a word play in the utterance of Jesus. Way–derek in Hebrew–can mean both a physical path as well as a “way of life.” When Jesus advised the disciples that they know the way (verse 4), Thomas was confused in verse 5: “Lord, we do not know where you are going, so how can we know the way?” Thomas assumed Jesus was using the word, way, as a physical path on which the bridegroom escorts the bride to the Father’s house. Jesus, by revealing Himself as “the Way, the Truth and the Life” in verse 6a, was using the word “way” (derek) not as an idle representation of Himself as a pathway, but as a dynamic representative of the Word of God–something amplified by the words Truth and Life–and something the disciples, as His students, had been taught over a period of three years. They were being instructed to carry on the work of Jesus, their bridegroom, in His absence.

There is a second literary structure that reinforces the first. It begins in verse 6a. Let’s start our explanation by comparing verse 6b to its parallel counterpart in verse 23b. The word come (erchomai) repeats in both lines. In 6b we have “no one comes (erchomai) to the Father” while in 23b we hear: “We (Father and Son) will come (erchomai) and make our abode (mon-ay) with him.” This is an antithetical parallelism in the text. And it raises an interesting question. . .who is coming to who?

The typical preaching in evangelical churches begins and ends oftentimes with John 14:6 as a “standalone” verse, treating line 6b, “no one comes to the Father except through me” as a reference to the destination of a believer after death. The entrance of line 23b, something rarely mentioned in sermons, confuses this matter of destination. Does the disciple come to the Father, or does the Father (and Son) come to the disciple? John 14:6 is uncritically repeated by preachers so often as a matter of destination after death that the listener is “numbed” to the idea that it could possibly mean something else. Yet, the purposeful placement of lines 6b and 23b as an antithetical parallelism, and ultimately as the beginning and end of a chiasm, demands that we reevaluate the meaning of John 14:6.

Who do the Father and Son come to? The one the Father loves. And who is that? The one who loves the Son and keeps the Word of the Son (23a), who in turn is the one, turning toward verse 6a, who does the “way” of Jesus, who does the “truth” of Jesus and who lives his life as Jesus lived His. That is the person who comes to the Father; and conversely, that is the person to whom the Father and Son come. All three–Father, Son and disciple–come into relationship with each other. And in the “marriage motif,” the Father, Son (bridegroom), and the one who keeps the Son’s Word (bride) all make their abode together. For way, truth and life are names of Jesus, and since names in Hebrew refer to a source of something, Jesus has described Himself as the source of those things–way, truth, life– which one follows. The word, abode, is the Greek mon-ay, the same word found in verse 14:2, in which Jesus declares that “in My Father’s house there are many rooms (monai).”

Continuing into our literary structure, I am reminded of a recent chat I once had with my doctor. We happened to be talking about the release of confidential information. There are specific provisions under the HIPAA Law that prohibit doctors from releasing medical records, even to a spouse, unless the patient has given expressed, written permission to do so. This, the doctor said, was hard for certain married couples to understand, especially those who have been together for a long time. Why? Because, from their standpoint, talking to one is just like talking to the other–it is as if they are one.

This comment about marriage reminded me in turn of the Oneness between Father and Son in line 11a: “Believe Me that I am in the Father and the Father is in Me.” Verse 20 “expands” this sense of Oneness to include the “bride” of Jesus–His disciples: “In that day you will know that I am in the Father and you in Me and I in you.”  If a bridegroom is one with his bride, the same is true of the teacher and student–in this case, the master and the disciple who emulates his master, does the ways of the master, practices the truth taught by his master and lives his life as the master lives his.

This leads us directly to Item D in the chiasm. As a bride loves her bridegroom, and as she waits patiently for his return, she abides by the terms of their contract, the ketubah. That which binds her to her bridegroom is love. As it relates to Jesus and His disciples, love is expressed and demonstrated by obedience. To love in Hebrew is ahav, meaning “I give.” It is what we as disciples give to our relationship with our Master–we do what we are instructed to do. Notice that in the verse, it is not one who declares love who loves Jesus, but one “who has My commandments and keeps them is the one who loves Me.” (line 21a) The word “keeps” is the Greek tereo, which corresponds to the Hebrew shamar.  At one time, Friends of Jesus had a banner on the back wall of our sanctuary on which was printed a verse that captured the meaning of shamar. God said of Abraham: “For I have chosen him, so that he may command his children and his household after him for they shall keep the way (shamar derek) of the LORD by doing righteousness and justice, so that the LORD may bring about for Abraham what He has spoken about him.” (Gen. 18:19) The phrase “for they shall keep the way” includes the words shamar and derek. They–Abraham, his children and his household–will walk in the way of YHVH “doing righteousness and justice,” not just making empty declarations about them.